On President Biden's announcement that all American adults would be eligible to get a coronavirus vaccine by April 19th, two weeks ahead of schedule:
"Or as Biden calls it: Operation Early-Bird Special" - Jimmy Fallon

"Way to go, Joe! Getting it done early. Although, supporters of the previous president are quick to point out that he was able to finish his entire presidency a whole four years before his original goal." - Stephen Colbert 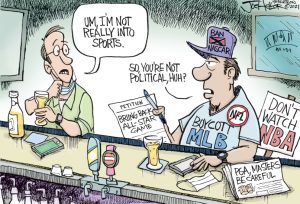 "You know more people are vaccinated when pajama sales go down and Spanx go up." - Jimmy Fallon

On the boycott wars over Georgia's newly-imposed restrictive voter laws, which is opposed by major companies including Delta, Coca-Cola and Major League Baseball, which pulled its All-Star Game from suburban Atlanta:

"And it's sure not a great look that Georgia governor Brian Kemp signed it behind closed doors guarded by state troopers, surrounded by white men while sitting under a painting of a slave plantation. He then celebrated by watching 'Gone With the Wind' and singing all the words to 'Gold Digger.'" - Stephen Colbert

"Now Donald Trump calling for a boycott of Coca-Cola is beautiful. He had a Diet Coke button on his desk in the Oval Office. The man urinates aspartame, OK?" - Jimmy Kimmel 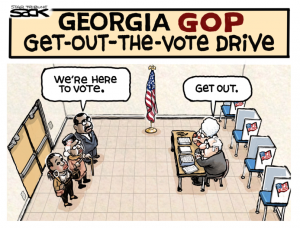 "And you know it's bad when the organization that includes the Atlanta Braves and the Cleveland Indians says you're too racist. That's like Matt Gaetz telling you to date your own age." - Stephen Colbert

On the investigation of Congressman Matt Gaetz's alleged sexual relationship with a 17-year-old and sex trafficking laws, which apparently started before President Trump left office. Gaetz, coincidentally, also unsuccessfully sought a blanket pre-emptive pardon from Trump for any crimes he may have committed:

"Gaetz has denied any wrongdoing, but sources say that just before the previous president left office, Gaetz asked for a blanket pardon. Oh, I don't think the blanket wants a pardon; I think it wants to be burned - it's seen too much." - Stephen Colbert 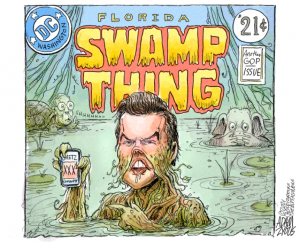 "You know you haven't done anything wrong when you check in with the president to ask for a pardon in case you happen to get accused of a sex crime somewhere down the line." - Jimmy Kimmel

"[imitating Gaetz] 'The president has called me everywhere: while I was lurking in the bushes outside of a high school, while I was making fake IDs, even while I was tutoring my girlfriend for the SATs.'" - Stephen Colbert

"Many of the fans were defiantly maskless. I like that adult men will go to a baseball stadium and wear a glove the whole game, for the one in 98,000 chance they might catch a foul ball. But a mask? No way, out of the question!" - Jimmy Kimmel

"You know how they kept the virus away? They did the wave and they just fanned it all the way to Arkansas." - Jimmy Kimmel

On the container ship blocking the Suez Canal:

"If you look closely, the ship has a tiny bumper sticker that says 'student driver.'" - Jimmy Fallon 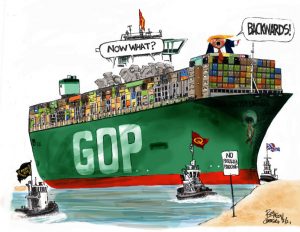 "But when you look at how big that ship is, I'm not surprised it got stuck. And the crazy thing is that whole ship is just delivering two AA batteries. Yeah, the rest is just extra packaging." - Trevor Noah

"Do you know how stressful it is to parallel-park when there's someone behind you? Imagine blocking a whole hemisphere." - Jimmy Fallon

On Mike Pence's new book deal:
"This will be the only time pages got whiter after words were printed on them." - Jimmy Kimmel

"I'm sure there will be a lot of talk about religion, his hopes and dreams, and then maybe a chapter about how his boss tried to murder him." - Jimmy Fallon

"The book will cover not just Pence's time in the White House but his whole life, including traumatic family events like the time he saw Mother without her bonnet. He even opens up about the time in college he experimented with almond milk." - Jimmy Kimmel 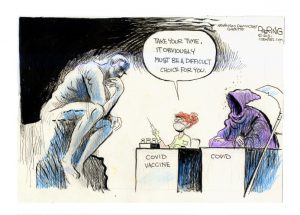 On vaccine distribution efforts:
"One potential side effect of the coronavirus vaccine is that people are exposed to the idea that government can get things done." - Stephen Colbert

"I don't know why Trump isn't promoting the vaccine. I mean, maybe he doesn't want to help Joe Biden end the pandemic. You know, maybe he's still trying to unload all that hydroxychloroquine that he bought last summer. The question is, why are Republicans so hesitant to get the vaccine in the first place? Well, it might be because their most trusted friends are telling them it can't be trusted." - Trevor Noah

On the passage of the American Rescue Plan Act:
"With this passage, the government is about to send $1,400 stimulus checks to millions of Americans. There you go, baby. You're rich! Buy yourself something nice, like rent or medicine." - Stephen Colbert

"Most Americans are thrilled the bill passed. In fact, President Biden is so amped, he just bit his dog." - Jimmy Fallon 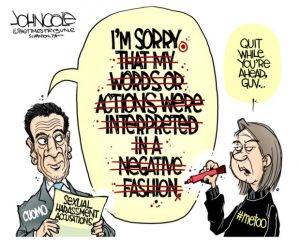 "The House passed the $1.9 trillion coronavirus relief bill today. Democrats are calling it a landmark bill that will give Americans desperately needed financial assistance during a pandemic, while Republicans are calling it 'not what Dr. Seuss would have wanted.'" - Seth Meyers

"First of all, you know you're in a bad spot when even Chuck Schumer calls on you to resign. That dude doesn't do anything hastily. Before he makes any decision, he has to have at least four brow furrows and inch his glasses down to the tip of his nose." - Seth Meyers 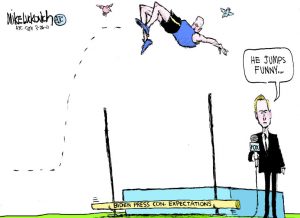 On Biden's first press conference as president:
"President Biden gave his first official press conference today. He would have given one sooner, but he spent a full month deciding if he should call on reporters with a point, a finger gun or a wink, and he landed on all three." - James Corden

"There were a lot of questions today about immigration after Biden announced that Vice President Harris will be overseeing the challenges at the U.S.-Mexico border. It's similar to how Trump put Pence in charge of handling the pandemic. When the going gets tough, presidents are like, 'You got this, right?'" - Jimmy Fallon