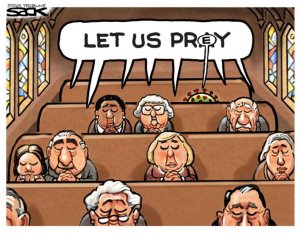 On Trump's recent rages, on Twitter, about Twitter fact-checking his tweets -- "This is crazy. This would be like if he declared war on Arby's because they said there are 550 calories in his curly fries ... He is Mr Twitter. And by the way, if he's so mad at Twitter, why doesn't he stop using it? He can't, because he loves it. He loves mashing those angry little thumbs." - Jimmy Kimmel

On Trump's executive order opening up places of worship before Memorial Day weekend, Jimmy Kimmel said it was Trump's "effort to make sure that the most devout Americans get a chance to contract the coronavirus too."

The order was a "controversial decision, one that could endanger the lives of many, but anyone who knows Donald Trump knows he's a man of great faith." As in, he spent Sunday on the golf course. 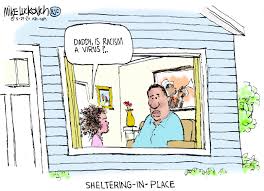 "It looks bad for the president to be golfing with 100,000 Americans dead and a stay-at-home order in place," said Jimmy Kimmel, "but try explaining optics to a guy who stared directly into an eclipse."

On Pandemic Nostalgia
Kimmel held down late night comedy after the holiday weekend, while Jimmy Fallon, Stephen Colbert, Conan O'Brien, Seth Meyers and James Corden all took vacations. This past Monday, they returned to a country seared by the police killing of George Floyd in Minneapolis and the protests that followed.

"Well, we're back after 10 days off, and I never imagined that after 10 days a global pandemic would not be the lead story. Remember when we were all afraid of our groceries? I miss those days." - Stephen Colbert 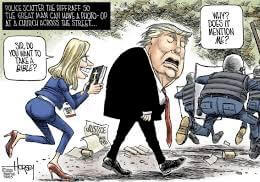 "It's not just U.S. citizens protesting racism in the United States - protesters gathered in London, Toronto, even Berlin. You know it's bad when Germany thinks your country's racist. That's like Jamaica telling you to put down the bong." - Stephen Colbert

On Trump's Photo Op
After he had police tear-gas and attack peaceful protestors with rubber bullets to clear a path to St. John's across from the White House, Trump stood in front of the boarded-up church, where he, "with visible confusion and discomfort, groped a Bible. [imitating Trump] 'I've only seen one of these - when I was sworn in. Let's see if I can remember - I hold The Bible, then you raise your right hand. Is that it? Am I extra sworn in?" - Stephen Colbert

"You can tell he's a man of faith from the way he holds The Bible like he's selling it on QVC." - Seth Meyers 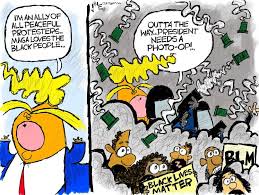 "It's The Bible, not an auction paddle. Looks like a camp counselor going through lost and found at the end of the summer. [as Trump] Is this anybody's book? No pictures in it, so it's certainly not mine.'" - Seth Meyers

"Not only is that a horrific abuse of the office of the presidency and our military, the tear gas was completely unnecessary. When people see Trump walking toward them, they naturally cry and vomit." - Stephen Colbert

"President Trump dismissed reports that he hid out in the White House's bunker last week amid protests and said he was, 'There for a tiny little short period of time, and it was much more for an inspection,' reported Seth Meyers, adding, "Dude, you are a New York City landlord. There's no way you voluntarily conducted an inspection." 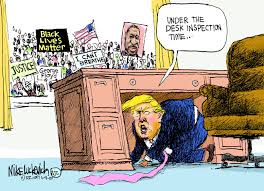 On Trump's Response to Minneapolis
"Stop saying the problem is just a few bad apples. It's not an apple problem - it's an orchard problem. If you went apple picking and the guy who ran the orchard said, 'There are a few bad apples out there,' and you said, 'How bad?' and they said, 'Kill you bad,' you'd say, 'This is a bad orchard.'" - Seth Meyers

On Trump's recent interview with his former press secretary Sean Spicer, where his was unable to pronounce "'Minneanapolis,' Jimmy Kimmel said "Maybe that was just the hydroxy kicking in. I'm sure he got it right the next time." Kimmel showed another clip. Nope, same result.

In the same interview, when asked by Spicer how he has grown in his faith, Trump said: "I've done so much for religion." "Ya know," Kimmel said. "Technically Satan has a done a lot for religion, too." 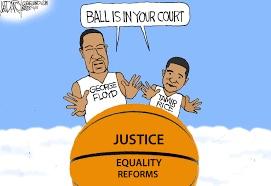 On General Mattis' criticism of Donald Trump as "'the first president in my lifetime who does not try to unite the American people, does not even pretend to try. Instead, he tries to divide us.' Trump saw that and was like, 'Why don't you be a man and tweet that to my face?'" - Jimmy Fallon

On The Protests
Some late night comics have grappled with trying to find humor in the current crisis.

"These protests, they have to result in change. Because when athletes took a knee peacefully at a football game, the vice president stood up and walked out of that stadium rather than see that protest. Now a policeman takes a knee to a man's neck and our leadership hide in a bunker rather than see this protest." - James Corden 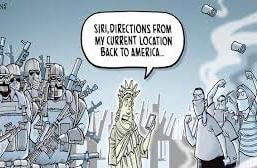 "Not only is addressing systemic racial and economic injustice the right thing to do, it is the safest, most conservative, most self-protecting, most self-serving thing to do. Contents under pressure will eventually explode, and that's not a threat - that's a law of nature.

So it's time to ask ourselves, as it is always time to ask ourselves, what kind of nation do we want to live in? That answer requires moral leadership. So take it upon yourself to be a leader and set an example of the kind of country you want to live in.. (because) you're not going to get that from the White House, so we need to step up and provide it ourselves. America is now officially B.Y.O.P.: Be Your Own President." - Stephen Colbert

SignUp for Daily updates on the issues, politics and the players
Forward and Follow on Facebook, Twitter and LinkedIn
DemList is relying entirely on individual contributions for support now. Please help with $25, $50 or $100!