Posted May 1, 2020 | by KimS | in Coronavirus, DemDaily, Resource, Trump Administration 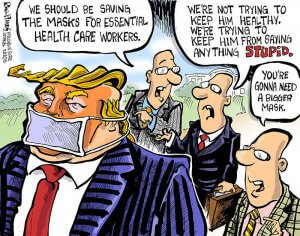 On Trump's Briefings
"We're now learning that as far back as January, 'the president's intelligence briefing book repeatedly cited the virus threat.' Well, there's your problem - those are three of Trump's least-favorite words: 'intelligence,' 'briefing,' and 'book.' If they really wanted him to pay attention, they should have called it his 'daily pornographic hamburger fire truck.'" -- Stephen Colbert

"Trump has been complaining that his administration inherited bad tests, which makes no sense.' No 1, you can't have a test for a virus before a virus exists, and No 2, he's in no position to be complaining about inheriting anything. If it wasn't for inheritance, he would be the doorman outside one of the buildings his father gave him." -- Jimmy Kimmel 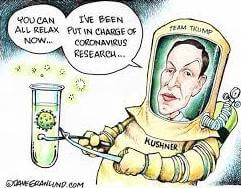 On Jared Kushner's claim that the federal government's response to COVID-19 is 'a great success story'
"[imitating Kushner] Yes, it's a great story. More people dying under this administration in 100 days than died in 20 years of the Vietnam War. That's a story that needs to be told. Perhaps in the blockbuster movie, 'Preventable Apocalypse Now.'" -- Stephen Colbert 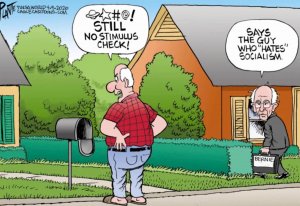 On Vice President Mike Pence's refusal to wear a mask during his recent visit to the Mayo Clinic
"See, he didn't want to wear a mask because he wanted to look them in the eye and say thank you. What kind of a mask was he planning to wear, Spider-Man?" -- Jimmy Kimmel 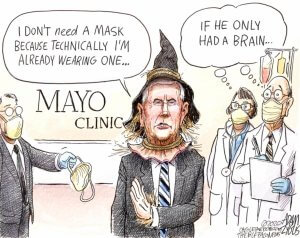 "You can still look them in the eye with a mask! It's not a blindfold...Finally, a medical explanation for why seeing Mike Pence's face makes you feel ill...By the way, for Mike Pence, 'looking you in the eye' is second base." -- Stephen Colbert

"But he might be OK,because looking at him, he drinks plenty of bleach...And Mike, you may not have coronavirus, but that doesn't mean you can't spread the other diseases you do have, like, for example, rheumatoid gravititis or chronic furrowed brow or mayonnaise blood." -- Seth Meyers

On Trump firing Dr. Rick Bright, the official spearheaded the federal government's effort to develop a coronavirus vaccine, for demanding rigorous testing of hydroxychloroquine, an anti-malaria drug President Trump has suggested as a treatment of COVID-19. When asked about the demotion Thursday, Trump denied knowing who Dr. Bright was or anything about him. 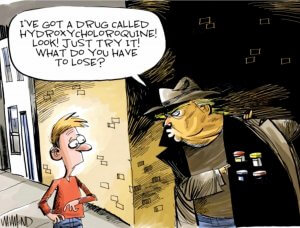 "These poor doctors working for Trump. If they don't give us the truth, they're not doing their jobs, but if they do tell the truth, there's a good chance he'll fire them, so their only option is to play dumb and hope Trump gets distracted by a Filet-O-Fish or something." -- Jimmy Kimmel 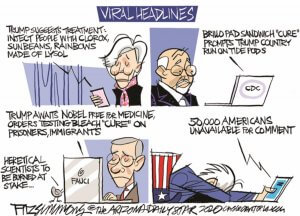 On Trump recommending ingestion of bleach to cure COVID-19
"[as Trump] Hey, look, my ideas don't lack scientific merit - they lack any merit. You ready for another idea? Boof some Listerine. Couldn't hurt. I mean, it stings, but that's how you know it's working." -- Stephen Colbert

"And I almost don't even blame Trump, because there's no way he even understands what bleach is. Like, do you think Donald Trump has ever cleaned anything in his life? Do you think he has ever actually used disinfectant? Cleaning supplies might as well be magical potions to him. [imitating Trump] 'I dropped a hamburger on the carpet, then some Mexican lady came in with some Clorox, sprayed it on the carpet, said some spell in Spanish, and then it was gone.'" -- Trevor Noah 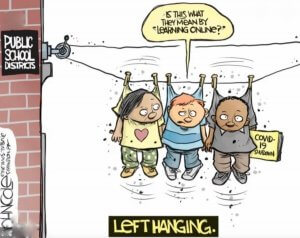 On Trump digging a hole for the 50th Anniversary of Earth Day
"Donald Trump celebrated Earth Day today with a shovel. The president, first lady and Mike and Karen Pence gathered on the South Lawn to dig a hole to bury his hair in." -- Jimmy Kimmel

"Trump finally got around to actually planting the tree. Here he is getting his exercise for the decade. [imitating Trump] 'I've gotten a lot of practice at my press conferences. Every day, I just dig that hole deeper and deeper and deeper.'" -- Stephen Colbert

"Look at how natural - so they are doing physical labor in their suits and heels. Melania is praying right now they don't dig too close to her escape tunnel." -- Jimmy Kimmel 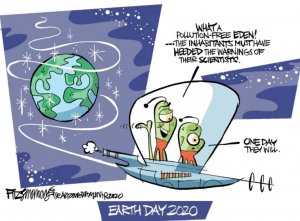 "The big 5-0. And I gotta say, Earth is still looking good. She's just getting hotter every year, even with the receding glaciers and putting on a little water weight around the coastline." -- Stephen Colbert

"Earth is having the best Earth Day ever. Because ever since coronavirus locked all of us in our homes, animals have been roaming free, the smog has cleared from the sky, the waters of Venice are blue again. Basically, as bad as coronavirus has been for humans, it's been amazing for the Earth. In fact, I don't want to be a conspiracy theorist, but isn't Wuhan a part of the Earth?" -- Trevor Noah

On Anti-Lockdown Protestors
"Now, these protests have clearly been infused with far-right ideology. Many demonstrators wore MAGA hats, they held up anti-Semitic signs and in Michigan, they even waved Confederate flags, a clear symbol of Michigan's proud Southern heritage." -- Trevor Noah 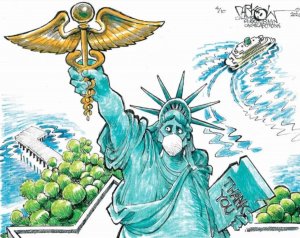 "A handful of idiots were out this weekend protesting against social distancing. For instance, this man in Washington State, carrying the sign 'Give me liberty, or give me COVID-19.' Buddy, you're in a large crowd, you're not wearing a mask, you're not six feet away from people - you might not need to choose." -- Stephen Colbert

"Despite everyone who works for him telling people to stay at home, despite the official White House mandate being 'shelter in place,' the guy who runs the White House tweeted 'Liberate Michigan,' 'Liberate Minnesota' and 'Liberate Virginia.' This from a man who refuses to even liberate Melania." -- Jimmy Kimmel 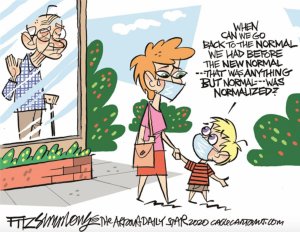 "In Denver, Colorado, there was a standoff between protesters and an angry health care worker. Well, you know what they say: it ain't over 'til the fat lady screams crazy right-wing talking points at a medical professional who's trying to save her family's lives." -- Jimmy Kimmel

Mr President, we would all like to get you out of the White House." -- Stephen Colbert

SignUp for Daily updates on the issues, politics and the players
Forward and Follow on Facebook, Twitter and LinkedIn
DemList is relying entirely on individual contributions for support now. Please help with $25, $50 or $100!

December 22, 2021 Twas days before Christmas and throughout the Senate and House, not a staffer was stirring, nor moving a mouse. The great halls were silent, with Congress on recess, granted a...