This morning, as I prepared to write today's Daily, an incredible thing happened.

I was working at home and my dog, Jia, started barking. From the window there didn't appear to be anyone outside but she would not stop, so I opened the door and we went outside to find a woman lying in the street a few doors down.

The middle-aged woman had fallen and hit her head and was semi-conscious.  Jia started tugging at the woman's clothes to help, and we stayed with her until an ambulance arrived. The capable Capitol Hill first responders followed to let me know her husband had been found and she is now recovering in the hospital. 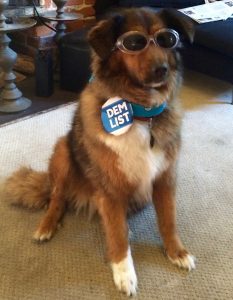 The thing is that Jia was supposed to have died a month ago from cancer.  Thanks to lots of love, and a Chinese herb called Yunnan Baiyao, she appears to be in a semi-remission, without pain, and is her happy, smart and energetic self.

I will still lose Jia sometime in the near future, but for now I am grateful, as are others, to have my little miracle pup.

In the midst of all the negativity, angst and anger that seem to dominate the airwaves and our lives these days, it is a nice reminder that good things still happen and there is reason to smile.

DemList is a daily political column dedicated to informing and connecting you to the issues, politics and the players. SignUp

May 25, 2022  Five states held elections Tuesday, including high-profile primaries in Georgia and runoff races in Texas. GEORGIA In the marquee US Senate race, the general election...