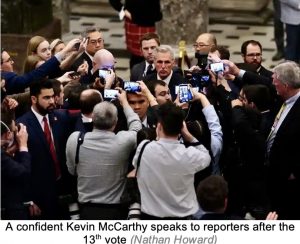 The bruising battle for the GOP speakership took a decided turn today, with 15 of the hardline anti-Kevin McCarthy dissenters flipping their votes in favor of the beleaguered nominee for the Speaker of the United States House of Representatives.

On the 13th ballot, with 432 of the 435 members present, McCarthy secured 214 votes to Democratic Leader Hakeem Jeffries' 212. The six remaining GOP insurgents cast their opposing votes, symbolically for Congressman Jim Jordan (OH), who is supporting McCarthy.

Two GOP members, both McCarthy supporters, were absent today but are expected to return when the House reconvenes at 10:00pm tonight.

If all current votes hold steady, that would bring the pro-McCarthy faction to 216 votes to Jeffries' 212 -- meaning that just two of the six holdouts would have to vote for McCarthy, or one for McCarthy and one "present" to award him the speakership.

It was the fourth day the US House has been held captive by a bitter and very personal fight that has paralyzed the business of Congress, including the swearing-in of members of the new 118th congressional session.

Many of the insurgent 10% of the GOP conference who have wielded their power to deny McCarthy the leadership include those who supported or played a role in another insurrection -- the January 6th attack on the US Capitol, which took place two years ago today.

Just as those members, all ardent advocates of former President Donald Trump, chose to deal with the devil in the White House at that time, they are once again selling their souls -- at the cost of the American people.