According to the US State Department, there are an estimated six million Americans of voting age who live abroad -- roughly 3.5% of all US citizens that were eligible to vote in 2020.

That is equivalent to the size of registered voters in Virginia, and more than enough to sway a presidential election. Getting the vote out among these citizens, however, is an enormous challenge.

At the forefront of that effort is Democrats Abroad. 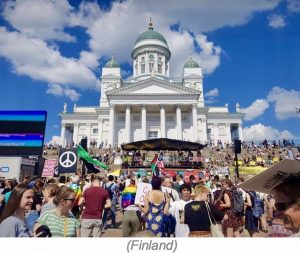 They run 48 country committees throughout Europe, the Americas, the Middle East, Africa and Asia, and members in more than 200 countries around the globe who vote in every state and Congressional District in the United States.

History
Efforts to secure the voting rights of overseas citizens began with Democrats in Paris and London during the 1960 Kennedy-Nixon presidential election, leading to the creation of Democrats Abroad in 1964.

It was not until the passage of the Overseas Citizens Voting Rights Act of 1975, however, led by then-House Majority Leader Tip O'Neill, that the rights of these citizens were recognized. 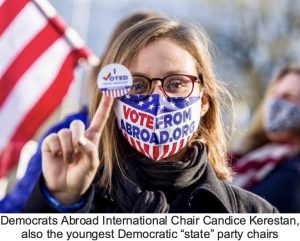 Led by Democrats Abroad, legal protections and full voter access to register and vote by absentee ballot was finally provided through the Uniformed and Overseas Citizens Absentee Voting Act (UOCAVA) of 1986.

Since UOCAVA was enacted, legal barriers to expansion of voting have been removed, including the Help America Vote Act of 2002, which instituted permanent registration for two full federal election cycles, and the first collection of statistics on overseas absentee voting.

In 2020, approximately 911,614 ballots were cast from abroad. Although the number pales in comparison to those eligible, the increasing number of votes of Democrats Abroad have the power to impact elections. Essentially the bluest of all "states," they helped bring home wins for Biden-Harris in Arizona and Georgia in 2020. 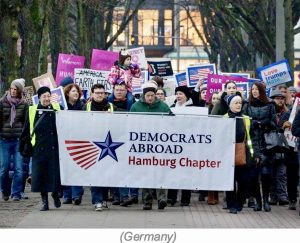 How It Works
Overseas voters covered under the Act include members of the seven Uniformed Services and the US Merchant Marines and their family members, US citizens employed by the federal government, and private US citizens residing outside the country.

US citizens retain the right to vote no matter how long they have lived abroad. They vote in the US state where they last resided, or if they have never lived in the US, where their US parent last resided. Each state has different procedures and deadlines, which can be found at Democrats Abroad's online voter registration tool votefromabroad.org.

The Help America Vote Act does not apply to non-federal elections, although the majority of states and territories allow qualifying citizens to register and vote in state and local elections as well. 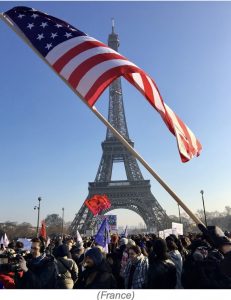 Resources
Democrats Abroad's worldwide activities include:
* Outreach to members of Congress on issues like overseas voting rights, Medicare portability and taxation
* Phonebanking to hundreds of thousands of voters abroad
* A 24/7 online voter help desk at www.votefromabroad.org
* Voter registration drives with thousands of study abroad programs
* Voter registration outreach in nearly every country on earth
* Targeted emails to members from their unique voter deadlines and ballot information

Pass this on to friends overseas!

President Barack Obama formally endorsed Hillary Clinton today, calling for party unity to win in November and “build a brighter future for this country we love.”