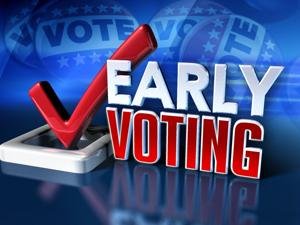 The 2018 midterms are expected to break voting records across the board and early vote numbers are no exception, with over 19 million people having voted as of this morning.

Not surprisingly, early vote numbers are high in states like Florida, Georgia, Nevada, Tennessee and Texas where hotly contested races are on the ballot.

How It Works
Early voting projections are derived from records of state and local election records of who has voted so far, but can be deceiving as they do not actually reflect how a person voted.
Early voting is generally done by in-person or by mail and works differently in each state, with periods between four and fifty days prior to Election Day. Early voting in person is allowed without excuse in 33 states and D.C., and absentee voting by mail without excuse is allowed in 27 states and DC. In 20 states, an excuse is required. 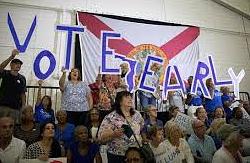 By The Numbers
Our breakdown is based on figures provided by the United States Elections Project and DemList's calculations based on party modeling results by TargetSmart and/or individual state sources.
In all cases, numbers are based on projections of party breakdown,  not actual votes. Where indicated *a percentage of voters could not be identified by party affiliation, leaving room for a sometimes significant number of undetermined votes in the equation.
Our point is to provide our readers a snapshot of where things stand, and to remind all of the importance of voting as we head into the last nine days leading up to the election!
State-by-State Early Vote and Absentee Voting Numbers
States excluded from this chart include Alabama, Connecticut, Delaware, DC, Hawaii, Kentucky, Mississippi, Missouri, New Hampshire, New York, Pennsylvania, Rhode Island and South Carolina, where they do not have early voting, or absentee or ballot return numbers are not available.
Related
DemDaily: Democracy on the Ballot
(Voter Registation Deadlines) 9/25/18
DemList
Connecting you to The Party