Of the 50 US states, Democrats hold 22 gubernatorial seats to Republicans' 28. Of the five US territories, four are held by Democrats and one by a Republican.

Amid a shifting political landscape, four of those races fall solidly in the "Toss Up" category.

Hobbs, who gained national attention for standing up to GOP attempts to overturn the 2020 Arizona presidential vote, was elected Secretary of State in 2018 with 50.43% of the vote. A social worker by trade, she previously served as a state senator from 2013 to 2019 and as a state representative from 2011 to 2013.

Lake, who was endorsed by Trump, bested establishment favorite and Ducey-endorsed developer Karrin Taylor Robson, 46.8% to 44% in the August 2 primary. 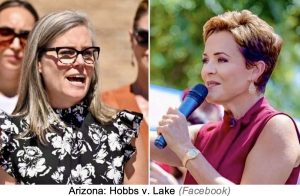 Polling: Three post-primary polls have the two in a statistical dead heat, with the last, Republican Trafalgar Group, showing Hobbs at 46% and Lake at 47%. The August 24-27 survey of likely voters, had a Margin of Error (MOE) of ± 2.9%.

Abrams came within 55,000 votes of defeating Kemp in 2018 and turned out more voters than any Democrat in Georgia history. The contest was also ground zero for the country's most bitter recount and legal battle following widespread allegations of voter suppression under Kemp, who oversaw most of the process as Secretary of State. Kemp disqualified over 1.4 million predominantly low-income and minority voter registrations during his term. 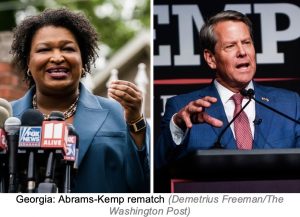 Kemp handily fended off a May 24 primary challenge by former US Senator David Perdue, who was endorsed by Trump in retribution for Kemp's refusal to overturn the 2020 presidential election results in Georgia. Former Vice President Mike Pence did a last-week stretch of campaigning for Kemp.

Also on the ballot: US Senate (incumbent Democrat Raphael Warnock), US House (14), eight statewide offices including Lieutenant Governor, Attorney General and Secretary of State, and State Senate and House seats.

Governor Laura Kelly, the only incumbent Democrat running for reelection in a state that voted for Trump in 2020, is being challenged by Trump-endorsed Attorney General Derek Schmidt. 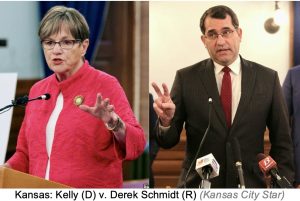 Kelly was elected in 2018, defeating polarizing Secretary of State and Trump acolyte Kris Kobach 47.8% to 43.3% in the historically ruby red state. She previously served four terms in the state senate, including as Assistant Minority Leader and as Minority Whip.

Although Kelly is undisputedly the GOP's top target, Kansas voters' resounding rejection of an August ballot initiative to end the right to an abortion provides Democrats hope for holding onto the seat. Kelly is adamantly pro-choice and Schmidt issued a legal opinion in support of the amendment before the vote. 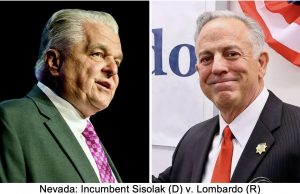 Sisolak, who succeeded retiring GOP Governor Brian Sandovalin in 2018, was elected the first Democratic Governor of Nevada in 20 years. He defeated Republican nominee and then-Attorney General Adam Laxalt in the general election, 49.4% to 45.3%.

Lombardo, who was endorsed by Trump last November, was first elected in 2014 and won reelection with 73% in Nevada's largest county. He won the 15-candidate June 14 GOP primary with 38.3%.

February 4, 2020 Iowa: Day Two In a unprecedented and chaotic scenario in which a glitch in Iowa’s new tallying process delayed yesterday’s results for almost 24 hours, partial...