Voters in 36 states will cast their ballots for Governor on November 8 in many races that may have a profound effect on the 2024 presidential election.

While the scope of gubernatorial power varies from state to state, most significantly with the level of veto authority, governors are also more independent -- in practice and in the eyes of the voters. There are 12 states where partisan control is split between state legislative chambers and the party holding the governor's mansion, and seven where the governor's party is different from that of both US Senators. 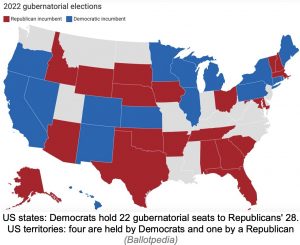 The Landscape
The 2018 midterms, when the same 36 states were last up for election, were a boon for Democrats, who won 16 seats and flipped seven -- their greatest gains since 1982.

In 2020 the status of the 11 gubernatorial elections up that year remained relatively unchanged. Just one state, Montana, flipped political control to the GOP -- increasing Republicans' share of the nation's governorships to 27 compared to Democrats' 23.

In the two 2021 gubernatorial elections, incumbent Governor Phil Murphy (D) narrowly won reelection, while Democrats lost the open Virginia seat in a devastating blow that reversed many of the gains that had placed the Commonwealth in the blue category just two years before.

The Race Ratings
Democrats are favored in 14 states, including anticipated flips in Massachusetts and Maryland, where two moderate GOP governors are leaving office -- and the Trump-endorsed Republican candidates are considered too far-right.

They are struggling, however, to hold onto the country's top four toss-up seats -- in Kansas, Nevada, Oregon and Wisconsin. 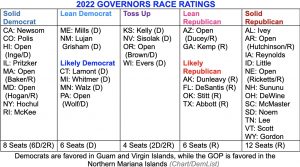 Kansas Governor Laura Kelly, the only incumbent Democrat running for reelection in a state that Trump won in 2020 (56.21%), is defending her seat against Attorney General Derek Schmidt, who has the former President's full support.

In Nevada, incumbent Democratic Governor Steve Sisolak is neck and neck with Trump-endorsed challenger and Clark County Sheriff Joe Lombardo. Sisolak was elected the first Democratic Governor of Nevada in 20 years when he defeated Republican nominee and then-Attorney General Adam Laxalt in 2018, 49.4% to 45.3%. Laxalt is now challenging incumbent Senator Catherine Cortez Masto (D) in the country's most competitive Senate contest.

In the critical swing state of Wisconsin, which Biden won by less than 1% in 2020, just one point separates incumbent Democratic Governor Tony Evers and his GOP challenger, Trump-endorsed businessman Tim Michaels. 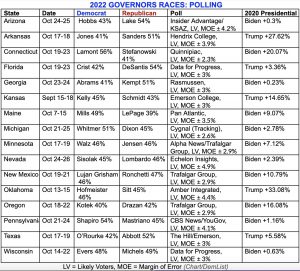 In a state where the voter identification is evenly split between Republicans and Democrats, the outcome of both contests will be viewed as a bellwether for the 2024 presidential race.

Republicans are now favored in 18 states, having recently expanded their leads in two battleground states.

In the high-profile rematch between Georgia Governor Brian Kemp and former House Minority Leader and voting rights activist Stacy Abrams, polling shows Kemp ahead by 10 points in The Peach State, which put Biden over the top in 2020 by 0.23%. Georgians will also be voting in the US Senate race between incumbent Democrat Raphael Warnock and controversial challenger and legendary football player Hershel Walker (R), which has dominated the headlines nationally.

August 31, 2020 Now just 64 days out from the 2020 presidential election, the Electoral College map has seen an increased shift in favor of Democrats. Based on our review of state ratings by...