Of the 50 US states, Democrats hold 22 gubernatorial seats to Republicans' 28. Of the five US territories, four are held by Democrats and one by a Republican.

Governors serve four terms in all but two states, Vermont and New Hampshire, where they serve two years. Virginia is the only state to limit its governor to one term. 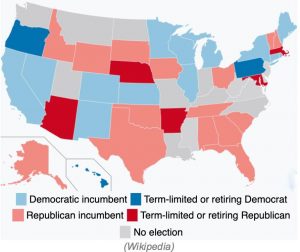 While the 2020 presidential election marked a number of historic shifts in voter performance, the status of the 11 gubernatorial elections up that year remained relatively unchanged. Just one state, Montana, flipped political control - increasing Republicans' share of the nation's governorships to 27 compared to Democrats' 23.

The Race Ratings
Despite the historical midterm headwinds against the party in the White House, Democrats are favored in 16 states.

In battleground Michigan, incumbent Governor Gretchen Whitmer (D) has moved from the toss-up to lean Democrat category, as has Josh Shapiro (D) In Pennsylvania's open-seat race, and by our analysis, Wisconsin Democratic Governor Tony Evers.

While Democrats are still favored to retain control in the open Oregon seat vacated by term-limited incumbent Governor Kate Brown; in New Mexico, where Governor Michelle Lujan Grisham is seeking reelection; and in Maine, where incumbent Janet Mills is running again; all are competitive races to watch.

Similarly, with the Sunshine State's primary now over, we are watching for momentum in the Florida gubernatorial between incumbent Ron DeSantis (R) and Democratic nominee Charlie Crist.

That leaves the focus on four seats that are considered a toss-up in Arizona, Georgia, Kansas and Nevada.

Tomorrow: A Rundown on the Races!

October 26, 2022 Voters in 36 states will cast their ballots for Governor on November 8 in many races that may have a profound effect on the 2024 presidential election. While the scope of...