In the most significant elections since Joe Biden took office, Democrats experienced a devasting blow in Virginia as Republicans appeared to have narrowly swept the state's top three offices, reversing the gains that had proudly placed the Commonwealth in the blue category just two years ago. 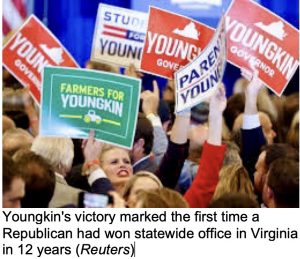 The election was initially expected to be a comfortable win for Democrats in a state that Biden won by 10% over Trump in 2020. The contest closed significantly, however, in the last month as President Biden's approval ratings saw a dip amidst dissatisfaction with the gridlock in Congress and infighting within his own party over the still-unresolved Bipartisan Infrastructure bill.

In an election that also played on the national issues of concern to Americans, Youngkin successfully parlayed a debate gaffe by McAuliffe on parental control in the schools to a larger debate on education which encompassed mask mandates, critical race theory, transgender rights and government intervention -- all played out in a nasty media war on the airwaves in the final weeks.

The race for Lt. Governor was a historic one between two-term State Delegate Hala Ayala (D), who is of Afro-Latina, Lebanese and Irish descent, and former State Delegate Winsome Sears (R), who is African American. Sears prevailed 50.7% to 49.3% over Ayala, to become not only the first woman, but the first woman of color, to hold the position in the state's history.

The winner of the Attorney General's contest between two-term AG Mark Herring and challenger Jason Miyares is still too close to be called. With 95% reporting, Miyares leads 50.7% to 49.3%, a margin of under 45,000 votes.

Only three of the country's 99 state legislative chambers are holding regularly scheduled elections in 2021: the Virginia House of Delegates, and both New Jersey's legislatures. 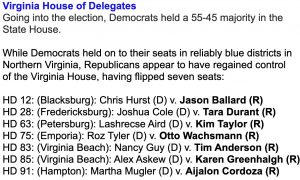 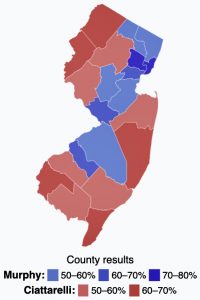 Although Democrats are expected to hold onto their majority in the Assembly, which stood at 52-28 going into the elections, over half the State House races are still undecided.

New Jersey State Senate
In the State Senate, where Democrats held a 25-15 majority at the outset of the election, several seats are still officially undecided.

In one of the most watched contests in District 8, incumbent Dawn Addiego (D) lost to Republican challenger Jean Stanfield.

The most high-profile outstanding race is that of longtime New Jersey Democrat Leader Steve Sweeney, who is trailing Republican challenger and professional truck driver Edward Durr 48% to 52%.

Nationwide Mayoral Races
Of the country's 100 most populous cities, 27 held mayoral general elections on November 2, 2021. While final numbers are still being tallied in some races, these are the apparent winners. 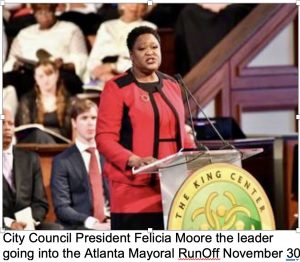 Georgia, Atlanta: In the 16 candidate contest, City Council President Felicia Moore (D) emerged as the clear leader with 40.8%, advancing to one of two spots in the runoff scheduled for November 30th. She will likely face fellow City Councilmember Andre Dickens (D) who is leading former Mayor Kasim Reed (D) 23% to 22.4%. 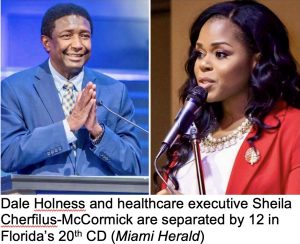 The eventual victor will face Republican Jason Mariner in the general election January 11, 2022.

November 12, 2020   While the results of the presidential marked a number of historic shifts in voter performance, the status of control of the state houses and mansions remains relatively...

August 30, 2022  President Joe Biden has delivered on his campaign promise to reduce student debt, unveiling an unprecedented plan to provide up to $20,000 in federal student loan cancellation for...

January 5, 2018 Maijuana captured headlines this week with the opening of public dispensories for retail sale of the drug in California, soon to be followed by Maine and Massachusetts.  They...