The Democratic National Committee filed a lawsuit today against Russia, the Trump campaign and WikiLeaks, alleging they conspired to disrupt the 2016 campaign.

The suit does not reveal new allegations, but uses the publicly-known facts of Special Counsel Robert Mueller's criminal investigation into Russia's election meddling as the basis for its civil suit.

No immediate action is expected to be taken as the criminal prosecution, still underway in the form of Special Counsel Mueller's investigation, takes precedent.

In the interim, it keeps the issues front and center, as a reminder between now and November! 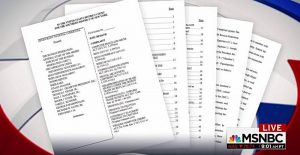 The Defendants
Those named in the DNC lawsuit: The Russian Federation, and the General Staff of the Armed Forces of the Russian Federation (GRU), a GRU operative using a pseudonym "Guccifer 2.0," London-based professor Joseph Mifsud, and Russian oligarch Aras Agalarov and his son, and Emin.

The suit comes the day after the Department of Justice's (DOJ) release, after pressure from Congress, of seven memos written by former FBI Director James Comey that detail his interactions with President Trump. More to come ...

January 6, 2023 The bruising battle for the GOP speakership took a decided turn today, with 15 of the hardline anti-Kevin McCarthy dissenters flipping their votes in favor of the beleaguered...