Yesterday's DemDaily: Swing States Update! provided an update on polling in the top 15 battleground states going into the election; but one additional state is in play for the first time in presidential history - Utah.

A "Swing" or battleground state, is a state where no single candidate or party traditionally wins the states' electoral votes every four years.

An October 10-11th poll by Utah-based Y2 Analytics shows Clinton and Trump at a deadheat with 26% each, followed by Independent Evan McMullin at 22% and Libertarian Party candidate Gary Johnson at 14%.

McMullin, a former CIA agent and policy director for US House Republicans, is a Utah native and Mormon. A late entrant to the presidential race, McMullin will be on the ballot in eleven states election day. 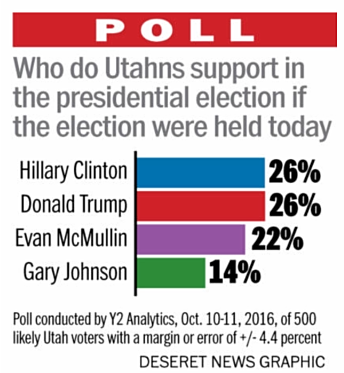 Johnson, whose candidacy has floundered nationally following several major media missteps, will be on the ballot in all 50 states.

Utah is home to the Mormon Church, or Church of Latter Day Saints, which claims 60.7% of the population as members. The socially conservative religion is traditionally tied to the Republican party, which has dominated Utah politics for the last 50 years.

Utah's Governor, Gary Herbert, is a Republican, as are its US Senators, Orin Hatch and Mike Lee. Lee and Herbert have publicly denounced Trump, along with three of Utah's four Republican Congressional Members.

What to Watch for: Romney is the only Mormon to have run for the nation's highest office and has yet to endorse a presidential candidate. Romney, who has declared he will not be voting for Trump (or Clinton), may throw his support behind either McMullin or Johnson and further tip the scales.

With 37% of the vote currently going to third party candidates (the Green Party's Jill Stein polled at 1%), Utah's six electoral votes are no longer a "gimme" for Trump - making his path to victory even more challenging.

For now, add Utah as the 16th state in the swing state watch column.