Hillary Clinton made history last night when she broke the 2,383 delegate threshold, as well as "the glass ceiling," while primary opponent Bernie Sanders vowed to supporters he would "continue to fight for every vote and every delegate we can get" through the Democratic convention in July.

If Sanders, who meets with President Obama Thursday, stays the course, then we are headed to a contested convention.
A contested convention is one in which multiple candidates are still actively fighting for the nomination, with or without a "presumptive nominee." While the Clinton-Sanders contest is viewed as an historical one, the circumstances are hardly unprecedented.
The Contested Convention: Cases in History
In 1992, then-California Governor Jerry Brown took his 618 delegates all the way to the convention despite a massive lead @2,430 delegates by

future President Bill Clinton. Brown withdrew his nomination in the middle of the convention.

In the 1988 presidential, neither
Reverend Jesse Jackson or Governor Michael Dukakis had won the 2054 delegates necessary to secure the nomination.
In the end, Dukakis won the nomination after the first ballot, but Jackson is credited with using his position and "rainbow coalition" initiative (in '84 and '88) to press for greater inclusion of minorities, now a cornerstone of the the party platform.
In a primary contest more reminiscent of today's, Senator Gary Hart ran as the anti-establishment candidate to then-Vice President Walter Mondale in 1984, the first year the Democratic Party began using superdelegates.

Hart, who was down by less than 3% of the popular vote, acquiesced when Mondale won the 1,967 delegates needed to secure the nomination. 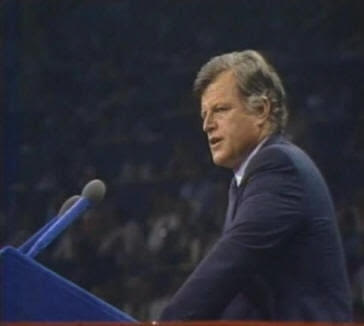 In 1980, Senator Ted Kennedy took his candidacy all the way through the convention with just 11 primary victories and 37% of the popular vote to Incumbent Jimmy Carter's 37 wins and 51%.
Kennedy was successful in his ultimate goal of changing the party's winner-take-all primaries.
No matter what he decides, Senator Sanders will certainly have a major impact on the politics of the platform at the convention if not by way of the influence that his role in the campaign has given him then certainly because of the validity importance of the issues his campaign values.
We will keep you posted as the drama unfolds.
DemList
Connecting you to The Party
Connecting you to Each Other
Kimberly Scott
Publisher

The Democratic National Committee released the first draft of the 2016 Party Platform — the official plank of issues that define us as Democrats. “The unprecedented decision to expand...