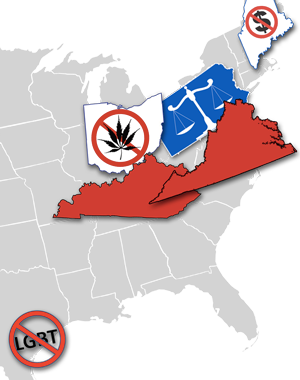 What does this mean? One take on the results:

Democrats Need to Re-Double their Efforts
by Brad Bannon
Democrats have good reason to look forward to 2016. Republicans are in complete disarray in Congress and on the presidential campaign trail.  But yesterday's election results indicate that we still have a lot of work to do in the next year.

This week the new GOP Speaker Paul Ryan blew off the fast growing Hispanic vote when he announced that the House would not consider immigration reform system. The Speaker also admitted what was obvious to most voters when he stated that the Republican Party "didn't have a vision."

The Republican National Committee has failed to organize its own presidential debates. A new national poll by NBC News and the Wall Street Journal indicated that 2 in 3 (67%) Republican primary voters support right wing extremists in their presidential race. The moderately conservative GOP candidates are way back in the dust.

Democrats took it on the chin in yesterday's elections though. A right wing Republican candidate won the governor's race in Kentucky and Virginia Democrats failed to pick up the one seat they needed to control the state senate.

Progressives didn't fare much better. Voters in Houston, Texas overturned a city ordinance that protected gay and lesbian residents against discrimination. In the key presidential battleground state of Ohio, voters turned down a proposal to legalize pot.

There were bright spots. Democrats took control of the Pennsylvania Supreme Court. Democrat Joe Hogsett will replace a Republican mayor in Indianapolis. Indiana. Progressives scored a victory in Maine where voters approved a strict law to regulate campaign spending.

Democrats are now on the clock to get out and organize over the next 370 days. If we fail, we blow a great opportunity to win in 2016.

February 28, 2018 There are four special elections on the calendar in 2018 and the contest to replace Republican Tim Murphy in Pennsylvania’s 18th Congressional District is heating up...