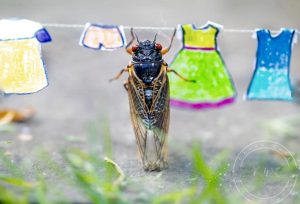 In the largest emergence since 2004, a tsunami of cicadas is cropping up across the United States, blanketing our communities, parks and yards with their presence in what is a biological phenomenon for some and an enormous nuisance for others.

The friendly "Brood X" insects, also known as the Great Eastern Brood, have begun a month-long ascension to the surface across up to 14 states and D.C., stretching to Tennessee and as far west as eastern Illinois.

The Broods
Although there are thousands of cicada species in the world, those that emerge every 13 or 17 years are collectively known as periodical cicadas and are only found in North America. 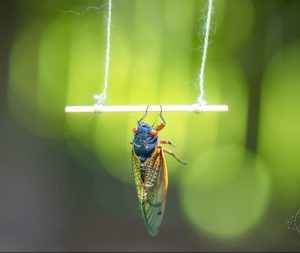 Although periodical cicadas were first recorded by the Pilgrims at Plymouth Colony in 1634, entomologists have been tracking broods by Roman numerals since 1893.

This year, scientists expect some places will have more than a million cicadas per acre, which could equate to more than 25 or 30 per square foot.

Love Is In The Air
After 17 years of burrowing and feeding beneath the surface, the immature cicadas or "nymphs" emerge to transform into adults with the primary purpose of mating! 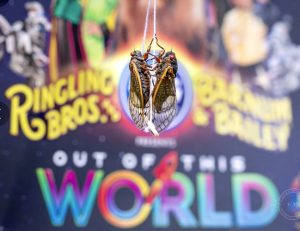 Cicadas crawl out of dime-size holes in the ground and immediately climb a vertical surface, where they will molt one last time, breaking out of their brown exoskeletons as soft, white adults. Within hours, they have full color, and a few days later, can fly. Adults cicadas live aboveground for two to four weeks and spend nearly all their time eating and trying to mate.

Their elaborate courtship involves a loud, buzzing "love song" emitted by male insects. When a bunch of Brood X males sing together, their chorus can reach 105 decibels - louder than a lawn mower.

After mating, the female deposits eggs in the tips of tree branches, slicing into it with her swordlike ovipositor and laying eggs in the space. Six to ten weeks later, tiny nymphs will hatch, tumble to the ground, burrow in and wait another 17 years -- completing the full cycle! 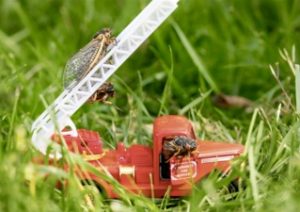 * Male V. Female: Male's abdomen terminate with a square-shaped flap. Females have a groove that encompasses the ovipositor. Only the male cicadas sing -- by flexing a drumlike organ called a tymbal on either side of the abdomen.

* Their Food: Adult cicadas do not eat solid food, but do drink fluids to avoid dehydration. They derive all their nutrients from tree xylem, a watery sap that contains minerals and amino acids.

* Safe for Humans and Pets: Don't let their blood-red eyes fool you. Adult cicadas do not sting or bite humans or pets, and they do not carry diseases.

If you are handling the cicadas, it is best to wait until they have fully emerged from their exoskeletons and have dried and hardened for 24 hours -- so they are less vulnerable.

* Plants: Although harmless to plants, they can harm young trees when eggs are laid in new growth. Rather than spraying pesticides, which are not effective at controlling cicadas, wrap young trees with cheesecloth to keep females from laying eggs. 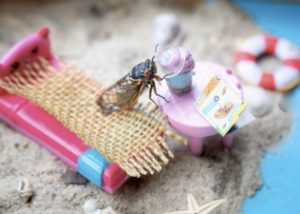 * Ecology: Periodical cicada years are quite beneficial to the ecology of the region. Their emergence tunnels in the ground act as a natural aeration of the soil, and the number of cicadas provide a food bonanza to all sorts of predators, which can have a positive impact on their populations.

The females' egg-laying process serves as a natural pruning that results in the tree producing more flowers and fruit the following year. Finally, after the cicadas die, their decaying bodies contribute a massive amount of nitrogen and other nutrients to the soil.

* Good Eats: Periodical cicadas can be tasty to dogs, cats, birds, reptiles and even people. They are best eaten when they are still white, and they taste like cold canned asparagus. They have a good balance of vitamins, are low in fat, and the females are particularly high in protein.

Make the best of your cicada experience!