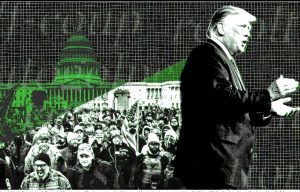 In the third day of the second Senate impeachment trial of Donald J. Trump, House Managers completed their formal case against the former president.

In powerful arguments for convicting Trump, the Impeachment Managers built on their riveting presentation of evidence Wednesday to send a stark message that the threat is not over unless Trump is held accountable and barred from holding future office. 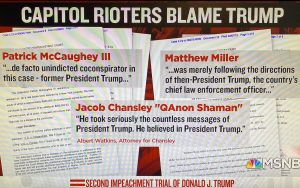 Thursday's presentation focused on connecting Trump's "pattern and practice of inciting violence" to the deadly insurrection at the US Capitol on January 6, 2021 that resulted in seven deaths and over 140 injured.

Over the course of five hours, the House Impeachment Managers once again used Trump's own words to tie him directly to the crimes of his insurrectionist soldiers and supporters.

Using tweets, video and documentation, Congresswoman Diana DeGette (CO) effectively, and methodically, showed how the rioters themselves echoed Trump's exact words while they stormed the Capitol, saying they were acting at the behest of the president. 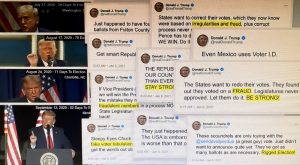 DeGette, saying, "Take their word for it," showed videos from inside the Capitol that pictured rioters saying, "Our president wants us here"..."We wait and take orders from our president"..."He'll be happy, we're fighting for Trump."

Managers played a series of clips of Trump over the last year where he explicitly called on his supporters to commit violent acts, or expressed support for alt-right extremist groups like the Proud Boys and Boogaloo bois.

They also pointed to the immediate aftermath of the seige and the bi-partisan condemnation by members of Congress, of former Trump administration senior staff, and by some of his own Cabinet, two of whom resigned in outrage. 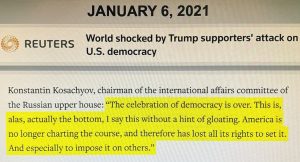 Throughout the day, however, the message of Managers was the consequences of Trump's actions, and the threat of future harm to our nation and our democracy.

Among the most impactful presentations was that of Congressman Joaquin Castro (TX), who articulately laid out the resulting threat to our country's national security, and the damage of the United States' reputation on the world stage. 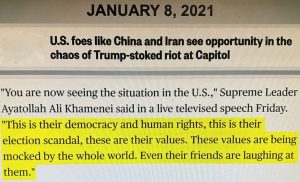 Among the exhibits Castro showed was a January 14th Joint Threat Assessment from the US intelligence community stating, "Since the incident at the US Capitol on 6 January, Russian, Iranian, and Chinese influence actors have seized the opportunity to amplify narratives in furtherance of their policy interest amid the presidential transition."

Raskin pointed out that the First Amendment does not protect the president from advocating treason and the overthrow of American democracy. He added that the insurrectionists who were incited by Trump came to the Capitol to disrupt the certification of the results of a free and fair election, blocking the first amendment rights of tens of millions of Americans who voted for Joe Biden. "If anything, Donald Trump's conduct was an assault on the First Amendment." 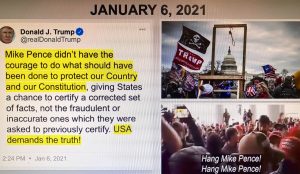 Neguse: "He struck a match, and aimed it directly at this building"

In resting the case, Raskin quoted one of our country's founding fathers, Thomas Paine, saying, "Tyranny, like hell, is not easily conquered but we have this consolation: the more difficult the struggle, the more glorious in the end will be our victory."

At 5:00pm, the Senate adjourned as a court of impeachment, and will resume Friday at 12noon ET when Trump's legal team will present their defense.

Thanks to Our Supporters