As outlined in the 20th Amendment of the US Constitution, power is transferred at noon on January 20th, after the new president takes the oath of office. 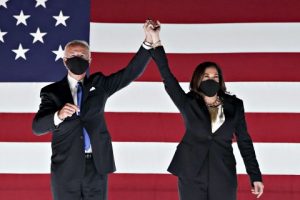 The DemList Convention Calendar was the national hub for all events

After a nationwide, collective sigh of relief by a majority of Americans (at least 51.3%), Democrats will celebrate the Inauguration of Joseph Biden and Kamala Harris as the 46th President and Vice President of the United States.

There are two major entities that oversee all aspects of the inauguration ceremonies and celebrations which, for the 59th inaugural, will be themed "Our Determined Democracy: Forging a More Perfect Union."

Under any circumstances, the event promises to be an historic one due to the nature of the outgoing administration and the coronavirus pandemic. 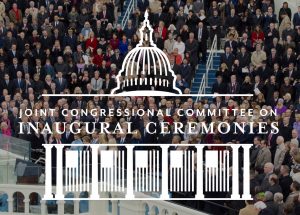 The JCCIC oversees the construction of the inaugural platform on the West Front of the U.S. Capitol, the oath-taking ceremony and a luncheon for the president and vice president.

The six-member, bipartisan JCCIC has been meeting since June, 2020 and in July approved a budget of $1.5 million.

In Washington, DC today, the inaugural platform is being built on the West Side of the Capitol, the National Park Service has closed off portions of Lafayette Square across from the White House, and Pennsylvania Avenue to set up for the inaugural parade. 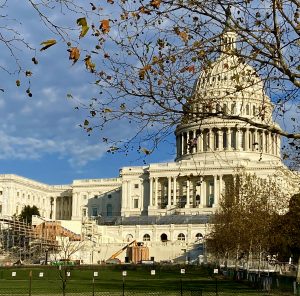 Despite the external signs, however, the details of the 59th Inaugural are far from certain.

According to incoming White House Chief of Staff Ron Klain, we can expect "scaled-down versions of the existing traditions" for safety's sake during the pandemic.

Aside from the platform ceremony, Biden himself has said he expects the inaugural to be more similar to last summer's Democratic National Convention, which was held almost entirely virtually.

Traditional Ceremonies
The inaugural ceremonies typically begin with the outgoing president and the president-elect riding together from the White House to the Capitol for the inaugural ceremonies. This practice has endured, with few exceptions, since 1837, when Martin Van Buren and Andrew Jackson rode together in a carriage made from wood taken from the U.S.S. Constitution. 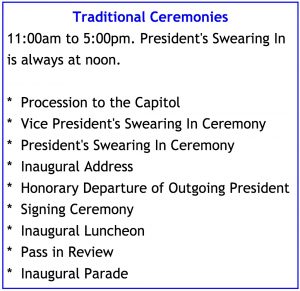 After the Vice President is sworn in, the President takes the oath of office, administered by the chief justice of the US Supreme Court. Since Ronald Reagan's 1981 Inauguration, it has been held on the West Front of the Capitol.

In recent years, the newly installed president and vice president have escorted their predecessors out of the Capitol after the Swearing-In Ceremony for their honorary departure.

Since Gerald Ford's departure in 1977, the former President and First Lady have left the Capitol grounds by helicopter.

The first official actions taken by the newly sworn president occur in the President's Room, just off the Senate Chamber in the US Capitol, where he will gather for a signing ceremony of potential nominations, proclamations or executive orders.

The new President and Vice President then proceed to the Inaugural Luncheon hosted by the JCCIC. 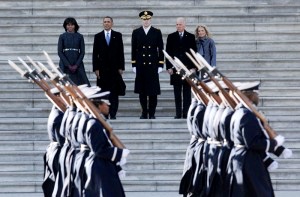 After the ceremonies and luncheon, the President and Vice President typically make their way to the East Front steps of the Capitol where they "pass in review" the military troops before leading a procession of ceremonial military regiments, citizens' groups, marching bands, and floats down Pennsylvania Avenue to the White House.

The President, Vice President and families then watch the inaugural parade as it passes in front of the Presidential Reviewing Stand.

We do know that The Marine Band, which has played at every inauguration since 1801, has confirmed participation. 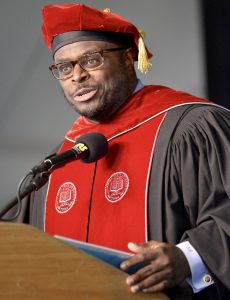 Tony Allen, who is the president of Delaware State University, and who served as a special assistant and speechwriter for Biden during four years of his career in the Senate, has been tapped as CEO of the inauguration committee.

Contributions & Limitations
Although federal law does not impose contribution limits, Biden's Presidential Inaugural Committee (PIC), which launched November 30th, is imposing its own limitations.
*  Corporate contributions limited to $1 million
*  Individual donations are capped at $500,000
*  The Committee will not accept contributions from lobbyists or the fossil fuels industry, including companies, executives and PACs whose "primary business is the extraction, processing, distribution or sale of oil, gas or coal."

Former President Barack Obama raised $53.3 million for his 2009 inauguration and nearly $43.8 million for his second in 2013. President Donald Trump's 2017 Inaugural Committee, which raised $107 million, is under investigation by the D.C. Attorney General's office for the illegal misuse of funds and "for willfully using nonprofit funds to enrich the Trump family."

Parade, Parties and Balls
In addition to the parade, the Presidential Inaugural Committee (PIC) handles ticketing for other formal public and private events hosted by the committee, including normally 7 to 9 balls where President Biden would make an appearance.

There are also an additional 10 to 15 other balls hosted by organizations, groups or states, as well as hundreds of smaller events.

While we do not know yet if the coronavirus crisis has wiped the entire slate of traditional events off the calendar, we can still expect major celebrations to be held virtually in D.C. and across American. During the 2020 Democratic Convention, the DemList Calendar profiled over 200 official and unofficial, predominately virtual events.

Inauguration Tickets & Attendees
One can expect far fewer than the usual 1,600 people on the platform, and public health measures such as mandatory face coverings, temperature checks, and social distancing, will be enforced.

Tickets to watch the inaugural ceremony, which is under the purview of the JCCIC, may be requested through your U.S. Senator or Congressional member. 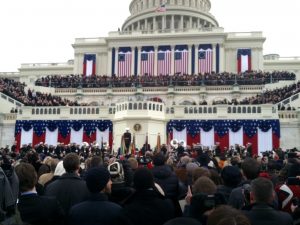 In 2017, the JCCIC distributed nearly 250,000 tickets to congressional offices in early January.

The number of tickets per office, which has yet to be announced, will be very limited. Each Member of Congress gives out their allotment in a different manner, with some offices even instituting lotteries as a means of assigning tickets.

In the past, members of the public without tickets have been able to access certain areas of the Mall to watch the ceremony.

The Transfer of Power
President Trump, who has still not conceded the election, has not said whether he'll attend the inauguration or take his part in the traditionally peaceful transition of power.

If Trump does not participate, he would be the first president to decline since President Andrew Johnson refused to participate in the inauguration of his successor, Ulysses S. Grant, in 1869.

There is speculation that Trump, instead, plans to hold a campaign-style rally and announce his 2024 bid for the White House.