In the ultimate test case of voting in the age of the coronavirus, Wisconsin voters went to polls last Tuesday, April 7th, after being forced to choose between safety and their constitutional right to vote.

Last minute legal wrangling between the Badger State's Governor and legislature caused widespread confusion and chaos which left citizens unsure, until the night before, whether the election would take place. 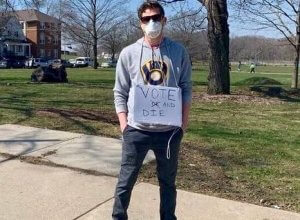 In a state which Donald Trump carried by less than 1% in 2016, and in which recent contests for governor and the courts have been decided by less than 30,000 votes, that is bad news for Republicans as both parties struggle to rewrite their playbooks for the 2020 elections.

Trump claims that Wisconsin Democrats' attempt to delay the primary was due to the fear of his recent, and seemingly powerful endorsement, of Kelly in the $5+ million state Supreme Court race. Trump actually endorsed Kelly for the ten-year term in January.  Karofksy's win over Kelly shifts conservative control of the court from 5-2 to 4-3.

The Battleground
As the impact of the novel coronavirus, which has infected 640,000 Americans to-date and has now forced sixteen states to postpone or extended their primary voting, the critical midwestern state was front and center as a test of executive, legislative and legal authority. 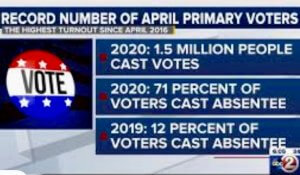 Weeks of debate between Governor Tony Evers (D), the Republican-controlled legislature and the Wisconsin's majority-conservative courts, culminated in an election eve ruling by the US Supreme Court that in-person voting would move forward.

While the high court ruled that the election date remain the same, and that absentee ballots must be postmarked by April 7th, it allowed until April 13th for them to be received.

The court's 5-4 decision, along ideological lines, highlights what has become a partisan fight, led by President Donald Trump, to push in-person voting,despite the health dangers, and to open states up again amidst the devastating effect on the economy.

Trump claims that Wisconsin Democrats' attempts to delay the primary was due to the fear of his recent, and seemingly powerful endorsement, of incumbent Republican Daniel Kelly in the $5+ million state Supreme Court race. 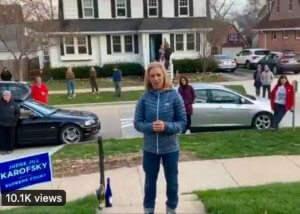 DNC Chairman Tom Perez called the decision "voter suppression on steroids. Because it was putting people's lives in danger. It was forcing those unconscionable false choices.'

Election officials reported 111 jurisdictions did not have enough people to staff a single polling place, and Milwaukee polling locations were reduced from 180 to just five.

Marginalized communities were disproportionately impacted with people of color, LGBTQ, the elderly, disabled and those suffering from illnesses, particularly in urban counties, where they waited in lines for hours.

Thousands of voters never received their absentee ballots, forcing them to choose between giving up their vote and braving election day polls. 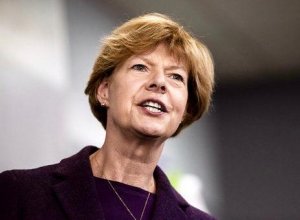 In Fox Point, village officials said hundreds of ballots were returned as undeliverable, without explanation, in the week leading up to the election, and in Oshkosh and Appleton, officials reported finding three tubs of absentee ballots in a mail processing center.

The Other Election
While overall turnout was down in both the Democratic and Republican primaries compared to 2016, the drop for Democrats was 30% less than Republicans.

This is likely influenced by the draw of the contested Democratic presidential primary, which effectively ended the day after the April 7th vote when Bernie Sanders suspended his campaign.

Joe Biden won the state with 63% to 32% over Bernie Sanders, with the remaining percentages going to Warren and a handful of former rivals still on the ballot. Although all candidates have relinquished the nomination to Biden, their "suspended" campaigns may still remain on the ballot.

With Wisconsin, and Alaska's April 10th election, Joe Biden now has a total of 1293 delegates, 698 short of the 1991 needed to formally secure the nomination. Bernie Sanders, who endorsed Biden on Monday, is second with 937.

While Wisconsin voters rose to the occasion, we have yet to know the cost. As of today, 3,555 Wisconsinites have contracted COVID-19, including 170 deaths. Today, Governor Evers (D) extended the state's "Safer at Home" order to May 26th.

Please Support DemList! We rely entirely on your contributions

June 24, 2022 In a 5-4 decision delivered at 10:00am this morning, the conservative majority of the Supreme Court of the United States struck down the landmark 1973 Roe v. Wade decision, holding...