As the head of the nation's top law enforcement agency, Comey was leading the criminal investigation into the role of Trump's top officials and campaign aides in the Russian government's efforts to influence the outcome of the 2016 presidential election.

The White House cited the President's "loss of confidence" in Comey's ability to lead the agency, pointing to his mishandling of the 2016 investigation into Hillary Clinton's use of a private email server while Secretary of State. 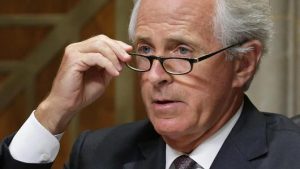 Although Comey ultimately did not pursue charges against Clinton, his highly controversial public decision to re-open the investigation just weeks before the presidential election is credited by many with delivering Trump the election.

Trump, who previously praised Comey for his "guts" in his pursuit of Clinton during the campaign, has reportedly been enraged by Comey's refusal to shut down the expanding Russia probe.

The news of the abrupt firing, which officially came at the recommendation of Attorney General Jeff Sessions and Acting Deputy Attorney General Rod Rosenstein, set off a political and public firestorm of critism from Members of Congress and commentators -- questioning the optics and ethics of a sitting president intervening in an investigation involving his own actions.

Senate Intelligence Committee Chairman Richard Burr (R-N.C.), who leads the Senate's Russia probe, said he was "troubled by the timing and reasoning of Director Comey's termination."

Comey, who was appointed by President Obama in 2013, found out from live TV reports while he was speaking to FBI employees in Los Angeles. He later received a personal letter from the President.

Democrats, and an increasing number of Republicans, have called for a Special Council to take over the investigation into the Russian election tampering probe. 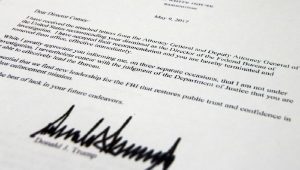 And President Trump? The sole appointment on his schedule today was with Russian Minister of Foreign Affairs Sergey Lavrov. Reporters were barred from the meeting.

DemList will keep you informed on all developments.