There are more than 65 million displaced people in the world today, the highest number on record since the UN Refugee Agency (UNHCR) began collecting statistics. More than 21 million of these people have crossed international borders in search of safety and are registered as refugees.

Of these, the destruction of Syria is the most dire humanitarian crises of our time. More than 11 million people - over half of Syria's population - have fled their homes, with 6.6 million displaced within the country and 4.8 million seeking refuge abroad.

Turkey has welcomed the most Syrian refugees - approx two million - followed by Lebanon and Jordan. The US has taken in more than 11,000 Syrian refugees and President Obama has called for an increase to 110,000 in the next fiscal year.

By contrast, Republican presidential nominee Donald Trump has made (rejection of) immigrants the central issue of his candidacy. This week, however, his son took the issue to a different level.

As the White House was leading a successful call to action to corporate America for refugee aid, Donald Trump, Jr was denouncing Syrian refugees as dangerous terrorists.

On Monday, Donald Jr posted a tweet comparing Syrian refugees to skittles, asking the question, "If I had a bowl of skittles and I told you just three would kill you. Would you take a handful?" 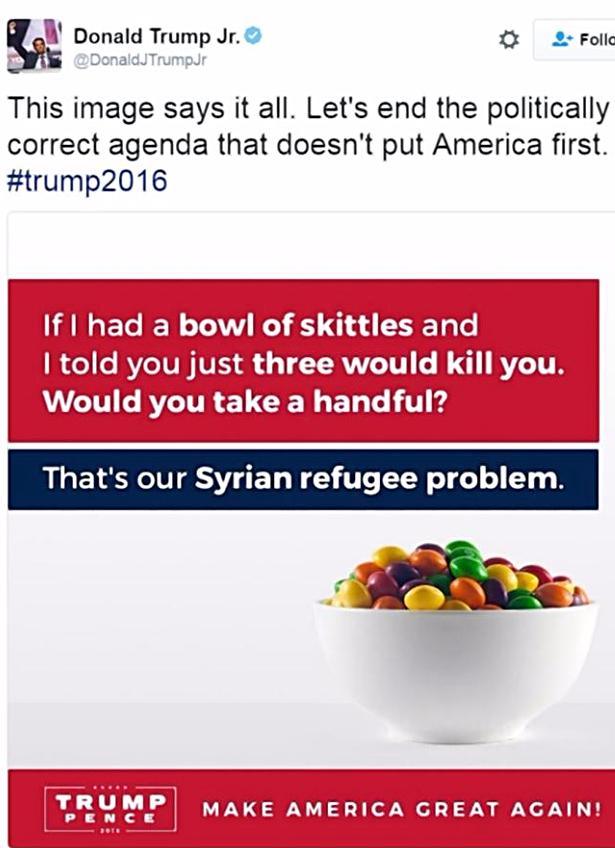 In reality, out of the total 750,000+ refugees resettled in America since 2001, not a single one has committed an act of terror.

By contrast, today's White House's "Leaders Summit on Refugees" raised a staggering $650 million from 51 companies to support more than 6.3 million refugees across more than 20 countries. The aid will go to: